skip to main | skip to sidebar

The sync is both ways and supports both adding and removing labels and/or groups to/from contacts.

Sync will match Timetonote labels with Google groups by name. If it fails to find a label or group with a specified name, it will create one.

On the add and edit contact pages, you'll now see a "Custom" option under all label list boxes, for all the contact fields: email, phone, address, web site, instant messaging and date. Select this option, and input any value for the label.

With this new feature, you're no longer limited to a predefined set of  values for the labels, like "Work" and "Home". You can input any value for the label, for example: "Bob's assistant" for a phone number: 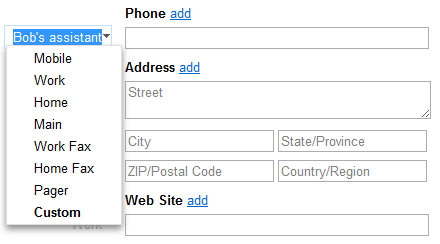 The custom labels will sync with your Google contacts.

Posted by Lucian Baciu at 7:53 PM No comments: